Banadirland or Lalaland: Myth or Reality

By Dr. Ali S. Faqi
August 23, 2009In recent days the Somali media has been reporting on an ongoing secret meeting in Nairobi, Kenya to discuss the formation of a Banadir regional state known as Benadirland. As you can see in the picture below, the meeting’s participants are all from a single Somali clan who as reported is planning to announce soon the formation of a state that extends it is border from Harardheere to Barawe district in the Southern Somalia. Most of the individuals in the picture are failed former politicians of the last twenty years. It seems that this is part of the Somali insanity that always pushes for controversial and polarized agendas. It is also related to a re-invention and renewal process that some failed Somali politicians go through, when excluded from the political process.

These failed ex-politicians are engaged in a parallel process that will undermine the current TFG who with help of the international community is trying hard to outlast from unending attacks of unyielding opposition groups. This infantile political move is nothing new, but is the reminiscent of the political game of then powerful Mogadishu warlords of the 2005 (now defunct by circumstances), who started a parallel process with the government of Abdullahi Yusuf by calling for the formation of a regional administration for the Banadir region.

Indeed the current meeting in Nairobi is more of an emotional project that these failed politicians are trying to gain support from members of their own clan who seem to be tired of their continuous deception.  It is an attempt to mobilize clan members from the fatigue of political nonsense that has transpired their lives for the last 20 years.

As most ill-intended Somali project, it started with the exclusion of the Benadiri and Lower Shabelle clans, who exceed in number from the very same clan that is meeting secretly. Ironically the group will expect their decision to be welcomed by those who they never cared to include in the consultation process.  This whole process is offensive to the dignity of the people who call home Mogadishu up to Barawe district in the south of the republic.  Lack of consultation and representation is nothing new to the natives of the southern Somalia.  Just look at the current cabinet members of the TFG. There is one single cabinet member who is representing Banadir, Lower Shabelle, Middle and Lower Juba with a population of over more than 1 million.

The formation of the Benadirland is a very sensitive and emotional issue and if feasible it requires full support from all stakeholders. The failed politics of the USC is the major reason to why Somalia is a failed state today. It is beyond any logical imagination to see the same mind that was used to destroy Somalia could be recycled and expect to fetch a better result.  People in the south of Somalia are traumatized and deserve a better solution than a plot ideated by a former prime minister, Mr. Ali Ghedi, who we all witnessed his poor political skills. I have had higher hopes for him as he represented a new generation of politicians, but his short-lived years in the office proved me very wrong.

Individuals who are pushing for the formation of the Benadirland state ought to accept that peaceful participation of all the stakeholders is the only way to deal with an important issue of this dimension to make it more tangible. A well organized and civilized debate should be organized and people’s participation should be encouraged. The process should be transparent and must weigh all the pros and cons and at the end the public must have a say to accept or reject before any decision can be made.  A decision should never be allowed to be made by the very few individuals who are holding the country hostage.

The ongoing political process should allow people to choose between a regional autonomy and federal states.  If federal states are deemed to be the solution for Somalia, a more realistic option will be:  Lower Shabelle, Lower Juba and Middle Juba will form their own regional state (the Riverland) as the natives of these three regions have lived in peace and intermingled with each other for several centauries.  Bay, Bakool and Gedo would form Southwest land and the central land state that is currently pushed by Mr. Ahmed Abdisalam would be another state and leaving Mogadishu as the capital for Somalia. These are realistic and practical options and if implemented could bring peace and stability in the country.

But how come I have a nagging suspicion that this is the same old-same-old game of the charter clans of Somali jostling over which clan will have an exclusive claim to have the right to milk the Lower Shabelle, and Juba COW.  This Benadirland initiative is not different.  It is often said that the definition of insanity is doing the same thing over and over again and always expecting different results. 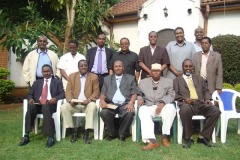